June! Gemini! Do you know the story behind the constellation called Gemini? It’s a good one. Twins were born to Leda, the mother, but there were two different fathers. Tyndareus, Leda’s husband (the king of Sparta) impregnated her, and Zeus (also known as Jupiter) came to her disguised as a swan, and impregnated her – on the same night! (Do you dare picture her with a swan and wonder why she had such an attraction?)

Anyway, Leda gives birth to the twins, Castor, who is a mortal, and Pollux who is immortal. As they grew up, Castor became skilled with horses and Pollux was just plain strong. When they started warring with enemies, the mortal son, Castor, was killed. Pollux mourned his brother’s death, and asked his father, Zeus, if he could make some arrangement to share his immortality with Castor. Zeus got creative and put them both up in the sky as the constellation Gemini, for all of eternity.

Two stars that look about the same size represent the heads of the twins – Castor is actually six stars in one - three binary stars and is white, and Pollux is more golden. They are very visible in the northern hemisphere in the winter, and are not visible at all from June 21 through July 20th due to the sun which stays within Gemini during that time. 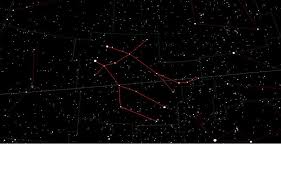 Posted by Atheist Vegan at 3:52 AM