Where Do Vegans Buy Food In Our Town?


[This is hopefully going to be published in our town's online magazine.]

When most people picture in their minds what vegans eat for dinner, they envision a pile of beet greens, raw kale and spinach, maybe with some unshelled nuts on the side!  Although we do try to get our green leafy vegetables, our meals are quite varied and delicious.  Anyone can enjoy vegan meals, but most people have no idea what to put on the plate!

Although I am not a great cook, I thought I would give some ideas that everyone can use to cut down on meat and dairy.  It just takes a little time to become familiar with how to substitute non-animal products in your cooking and baking.  You too, can help keep animals from being enslaved, tortured and killed.  The easiest way to cut down on meat and dairy is simply to eat more fruits, vegetables and starches.  Starches feed the brain and fill the belly!

I have more food articles planned – only so much will fit in this one post! Let's start with the basics:

First, a huge change is simply to change your milk.  There are many non-animal types of milk, such as soy milk, chocolate soy milk, almond milk, hemp milk (I did not like), and coconut milk. When I first went vegan I was not crazy about either soy or almond milk and worried I would not last as a vegan.  I had been almost addicted to skim milk, drinking four to six glasses a day, so liking the non-animal version of milk was important!  Well, it took me only three days to go from preferring the taste of skim milk to preferring the taste of soy milk and almond milk!  Now the idea of bitter, watery skim milk is revolting. I also cut down to two glasses total per day of non-animal milk, which just naturally happened.   Here is a picture of me loving my generic organic soy milk from Wal-Mart.  Reasonably priced!  [I decided to put my picture on here, because no one I know will find this blog anyway!] 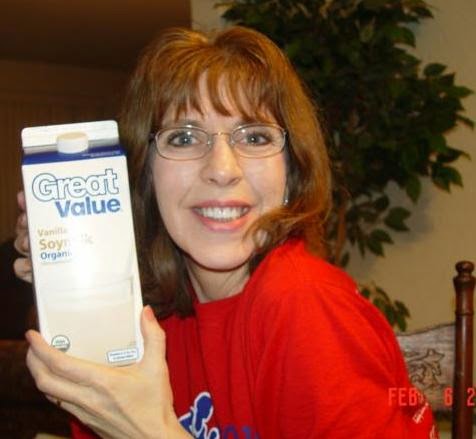 Another change is to use either oils or Earth Balance margarine instead of butter.  Earth Balance is delicious!  It is a little more expensive than regular butter, but who wants too much butter or oil in their systems anyway!  I treat Earth Balance like a delicacy. 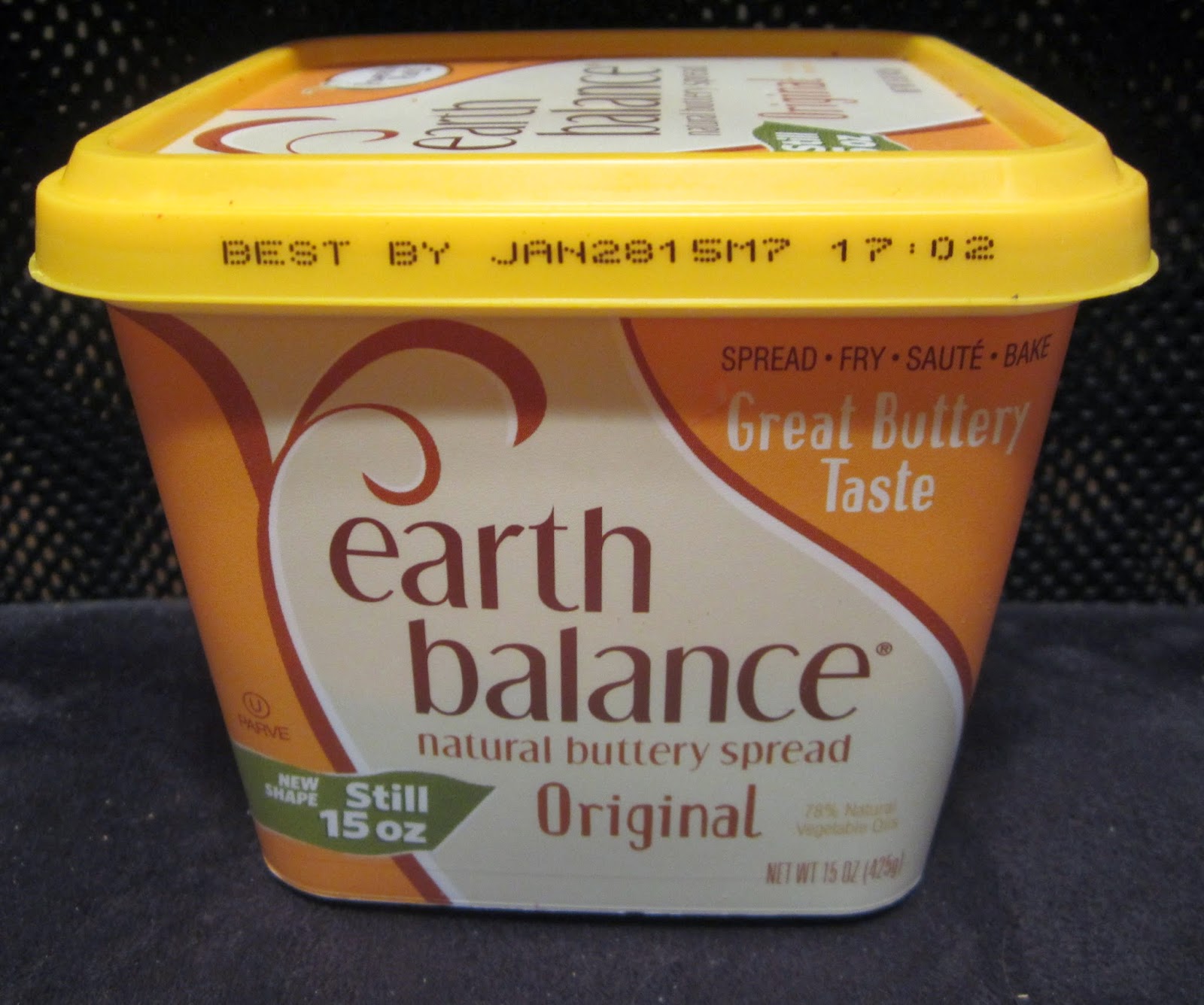 Egg substitutions are trickier for the beginner.  There is a product called Ener-G Egg Replacer that is available at Kroger which is similar to a baking powder mix.  It is stirred with water to make an egg-like substance to take the place of the eggs for baking.

Many people also use applesauce or bananas as a substitute for eggs.  In fact, two of my favorite chocolate chip recipes have applesauce in them, and the great part is you don’t ever have to worry about a child “eating raw dough” when egg is not in the batter!   My son, who is not vegan, always requests the vegan chocolate chip cookies because he feels safer eating the dough!  One other egg mixture you may have heard about is ground flax seed.  I get my Omega 3s from fresh ground flax seeds that I sprinkle on my cereal each morning.  It can also be used as an egg mixture when some is stirred with water.  The amounts of water to flax are listed on recipes, so it is easy. 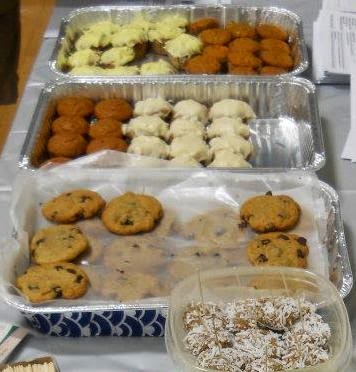 Another wonderful product is Vegenaise.  I buy the original Vegenaise (you may have guessed it is the vegan version of mayonnaise) at Country Nutrition in the refrigerated section.  It is more expensive than regular mayo, but most people who try it prefer the taste over mayonnaise, even if they are not vegan.  It is lighter in taste.  (This one is almost empty - from my fridge!) 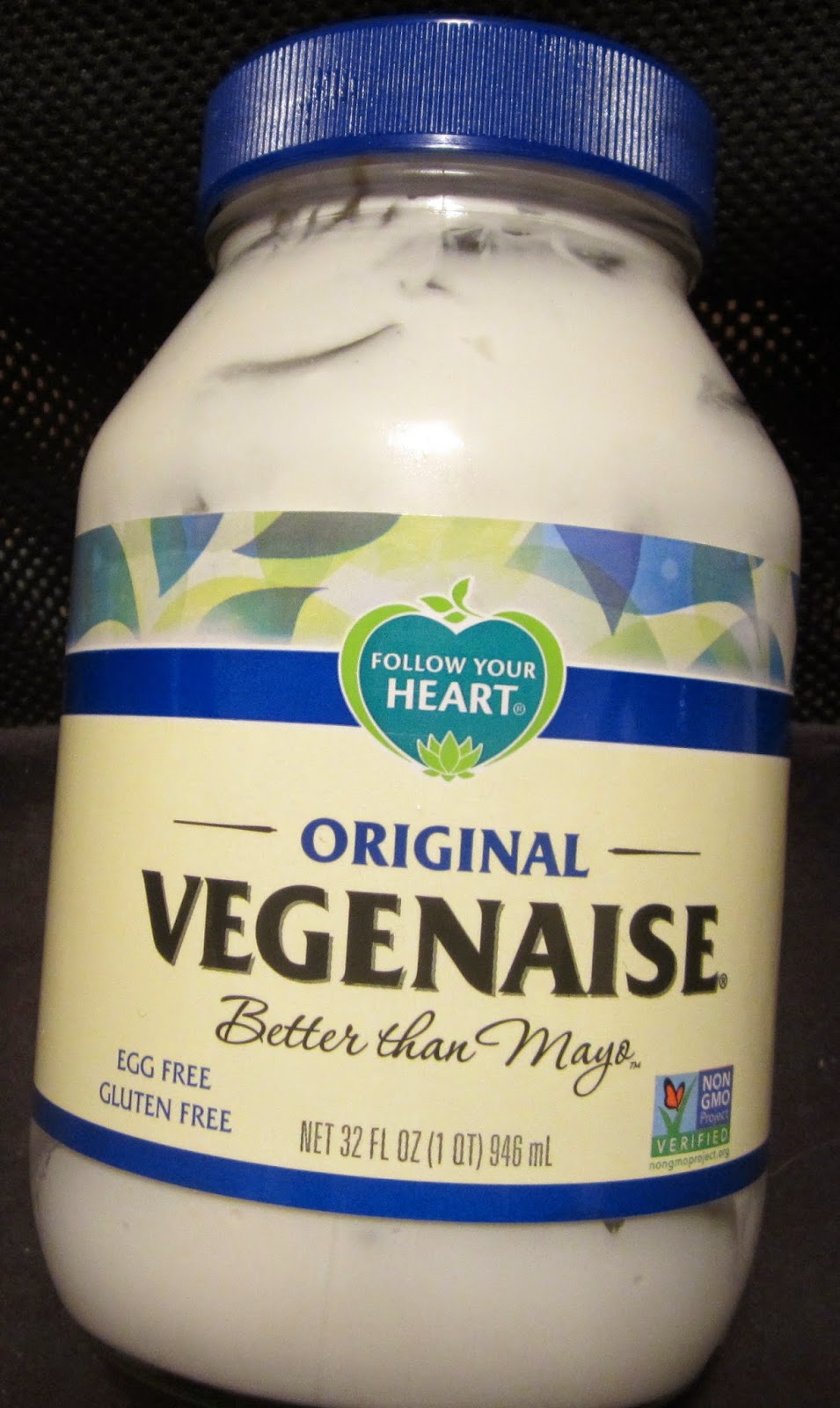 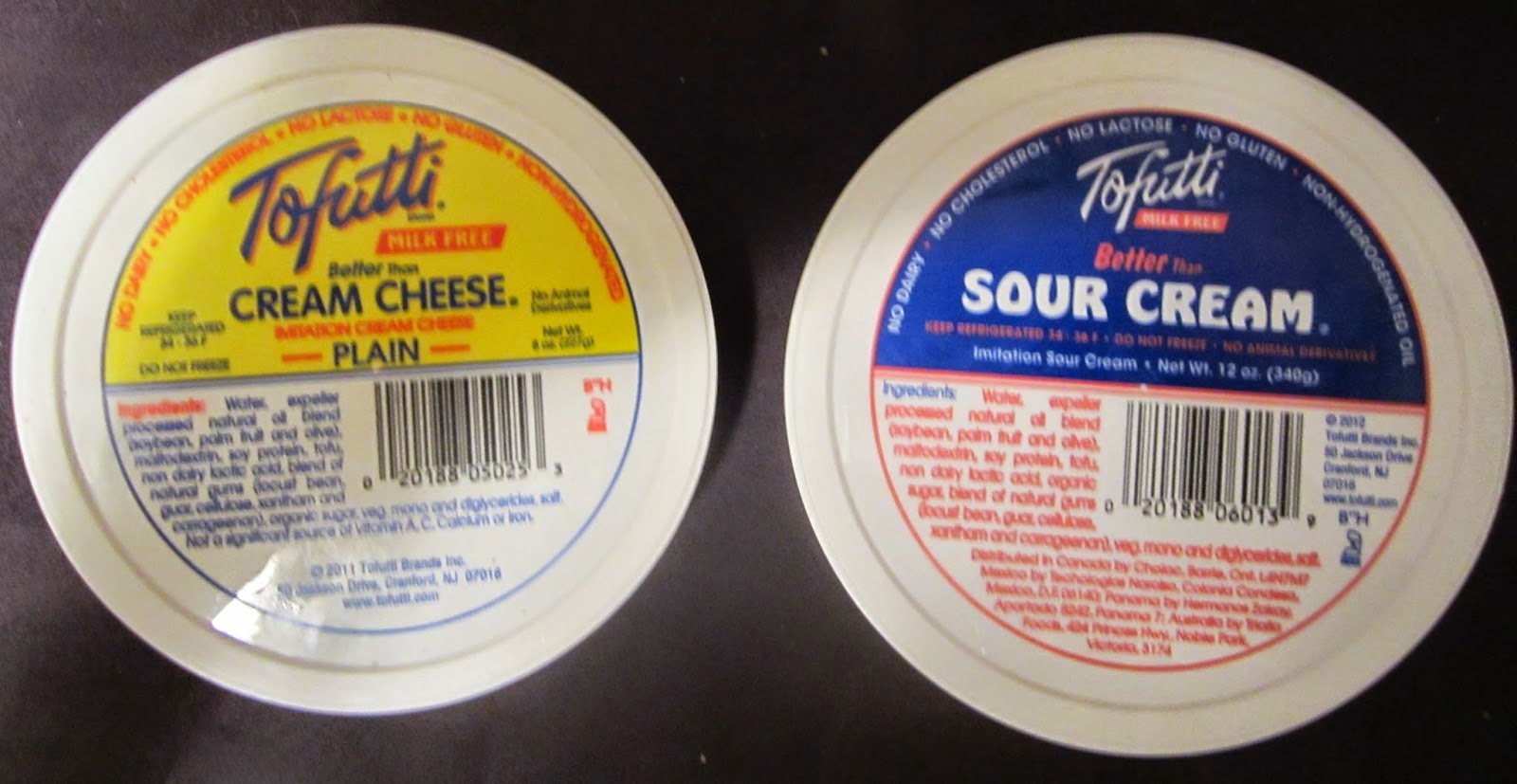 Lastly I will list two vegan snacks that I love.  The first is Reduced Fat Wheat Thins.  I eat these in between meals or with some jelly or Tofutti cream cheese (or both).  I never tire of putting several in my mouth and taking a sip of coffee and having the crackers slowly melt in my mouth.  (Simple pleasures are the best, right?)  I prefer the taste of Reduced Fat to regular Wheat Thins.  Avoid the “flavored” varieties of crackers, because milk products are often added.  Vegans become experts at reading labels!  Reduced Fat Wheat Thins can be bought at just about any grocery store.  I like the family size at Wal-Mart. 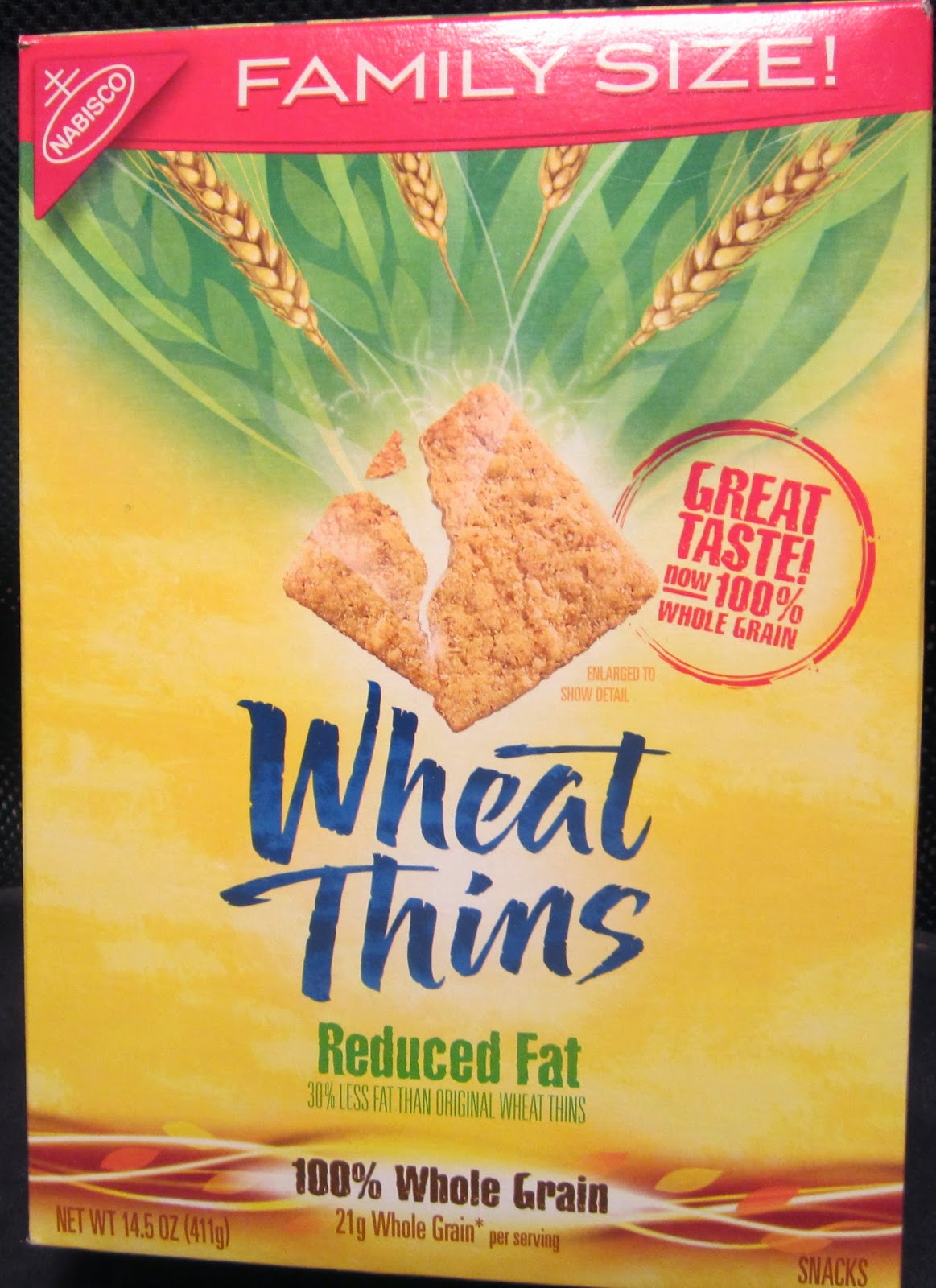 (Sometimes I wonder what I am doing, giving away where I purchase my products, because I have noticed Reduced Fat Wheat Thins [Family Size] are often missing from the shelves!)

The other vegan snack is what I often have on a car trip (although it makes the steering wheel messy).  Cracker Jacks!  They actually have molasses and seem like a pretty healthy snack.

And just so you do not think I ever eat any fruits or vegetables, I love to cut up generic organic carrots I buy at Kroger (they nearly always taste the best), and slice them into little circles, and pop them in my mouth for a snack.  I go through about three carrots a day at work.  I also try to eat a fresh fruit like an apple, banana or orange, but because I am not huge on fruits, I will eat dried fruit as long as no fat is added (banana chips are loaded with fat).  I eat dried blueberries, cranberries, raisins, cherries and mangos.  The cranberries, cherries and blueberries can actually come in one package, and I buy extra blueberries in another package at Wal-Mart.  Those blueberries are yummy! 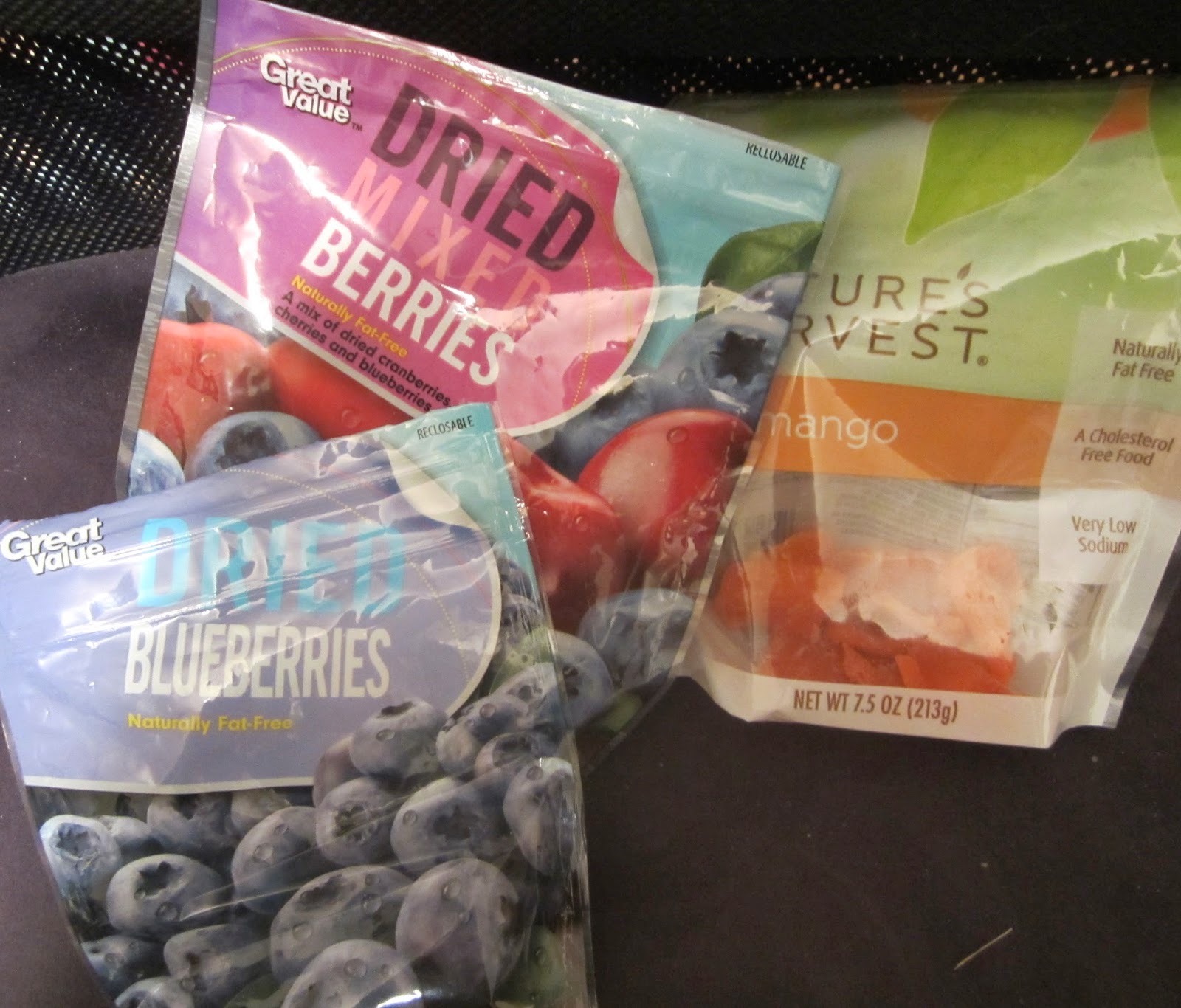 This is enough information for now.  I will continue from time to time with specific ideas on how you can minimize the amount of animal products in your diet by making simple choices.

Note sent to the White House

Today I sent this to the White House.  Every once in awhile I send along a good idea, but they may think I am a crazy hippie with this one!  I sent it anyway.


"We need to take Michelle Obama’s healthy eating plan a few steps further.  I figured this out:  The government pays farmers money in subsidies to abuse and kill animals so we can buy the meat cheaply, to become overweight and possibly sick from diseases due to animal overcrowding and waste, so we will need to buy medicines and make hospital visits, thereby supporting that industry and the health care industry; all the while causing more climate change.  I probably could think of more in this primitive cycle of feeding people via animal slavery.  I do not see anything right with it!  It fits the definition of “a racket” in that those who advocate for it pretend that it does good, when it is harmful.
We must become more enlightened, more moral, and urge the country’s people to become as close to vegan as they can.  The government can implement this “change for good.”  You can urge farmers to grow grain crops for people’s consumption.  You can stop these subsidies for beef, pork, chicken, turkey and fish.  You can research Dr. McDougall’s many articles on his web site and other doctors who advocate a low fat,  plant based diet.  (We have known meat causes Cancer for 100 years!)
Now I will throw the Founding Fathers at our present government:  our major Founding Fathers were visionaries who put their enlightenment thoughts into action.  They were bold and progressive, so doing the same ol’-same ol’ is not what our country is about.
Please bring our country up to standards on morality.  Have them care outside of themselves, outside of their own species.  Teach them to look globally at health issues, food issues and environmental issues.  It will be obvious that meat and dairy must go."

Posted by Atheist Vegan at 5:35 PM No comments: