We make changes all the time in our diets when we find out new information.  For instance, to be on the safe side, many people avoid aluminum cookware because all Alzheimers’ patients are found to have excess aluminum in their brains, even though they have not made a positive link to food or cookware.  I easily made the switch to non-aluminum baking powder, which works just as well.  Recently, I also stopped taking vitamins because a buildup of copper, iron and other metals can also accumulate in the brain.)  Now I must work on my choices of cereal to consume, and this is turning out to be more of a challenge!

I used to eat any vegan cereal including Reece’s Puffs and Life.  Then I became concerned about the hydrogenated oil in the cereal, the sugar and especially the BHT.  BHT has been linked very remotely to Cancer, but even remotely is enough for me to want to avoid it.  I loved Life cereal because of the name.  But after I took home two boxes from WalMart that smelled like they had been stored for three years in a mildew filled room, I switched to the generic version, which to my surprise was lower in oil and sugar, and didn’t contain any BHT!  I thought I was all set – until I heard about folic acid.

Folic acid is added into just about every carbohydrate due to the worry that pregnant women were not getting enough folate and that lack could cause birth defects.  Folate is good for you and is found in plants naturally, but folic acid is when they take folate and extract it and then put it back into carbohydrates in concentrated form.  Recent studies suggest it might constrict arteries!  Ugh!  Why did they have to add folic acid to my favorite food!

I started combing the cereal aisle, reading labels, and found cereals with 100% folic acid like boring Bran Flakes!  That’s not good!  What about Shredded Wheat?  60% folic acid!  Any cereal I found that was lower in folic acid was higher in sugar and oil!  Only one cereal in all of WalMart was really low in folic acid, 6% , and was also low in sugar.  It also tasted like it was low in everything and was too bland to stand!

I walked around the cereal aisle in a daze, forgetting what I was looking for on the labels: fat, sugar, BHT, folic acid?  Sigh.  My favorite comfort food had suddenly become difficult.
Was I resigned to eat oatmeal all the time?  I really love my cold cereal – I must search on!

Continuing over at Kroger I looked at some Mom’s Best Cereals, the Toasted Wheatfuls, the Safari Cocoa Crunch and the Toasted Cinnamon Squares.  None of them have any folic acid added!  I also bought Golden Grahams because it has 25% folic acid and I figured I could mix it with the Mom’s Best cereals and still have a lower folic acid count.  But I forgot about the BHT!  Golden Grahams will be off the list as soon as I finish the box.  So about those yummy sounding Safari Cocoa Crunch and Toasted Cinnamon Squares cereals: one has 6% saturated fat, and the other 5% total fat.  It’s a toss up whether I was doing better way back at the beginning with the generic Life cereal called Crunchy Oat Squares with 60% folic acid, because it was low in fat and sugar.  Maybe if I just combine it with the Mom’s Best Toasted Wheatfuls for a treat, and do some cereal rotations with cereals at 25% folic acid combined with the Wheatfuls.  Oh, this is too much like Chemistry!

Now to check my crackers and breads.  Here we go again!

Posted by Atheist Vegan at 8:27 PM No comments:

Is the Wall of Separation of Church and State Permeable?


If you hear the word “wall” do you think of it as a solid separation or something you can go through?  Recently, an editor (and owner) of a local newspaper claimed that Americans are taking this “wall of separation” thing too far.
I have to wonder what he thinks a wall is!  And how can keeping church and state separate be taken too far? 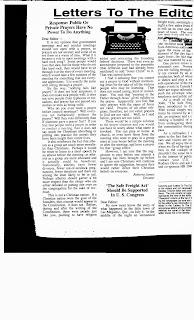 The editor talked about how he thought prayer was appropriate for government meetings and that he would always say “In Jesus name we pray, Amen” even when he was asked to be more inclusive.  I doubt he would agree if meetings he attended always had a Muslim prayer.  Anyway, here is the response I wrote in the Letter to the Editor section.  I have to commend him for printing what I wrote without editing (even though he did not correct one mistake I made) (I corrected the error in the text below).
In another local paper, that editor takes out “anything offensive” and not much is left of any of my carefully worded articles!  This is one reason I prefer writing in this tiny paper!

In case you cannot see the article above, here it is:


"It is my opinion that government meetings and any secular meetings should not open with a prayer, as prayers are not secular; and some of us see them as a waste of time.  What if it became a rule to open meetings with a hard rock song?  Some people would love that idea, but for those who do not like hard rock, they would have to sit through it at the start of every meeting, which would take a few minutes of the meeting for something that not everyone appreciates.  It is exactly the same with sitting through a prayer.
By the way, “nothing fails like prayer.” It does not heal amputees, it does not make sick people well, it does not save people from typhoons or tornadoes, and prayer has not passed any studies or tests as being valid.
Why do you even want a prayer before council meetings?  Will everyone act barbarically without the prayer?  Will they vote differently than if someone gave a prayer first?  If you feel that people need a prayer in order to conduct a meeting, then it does not say much for Christians absorbing or putting into practice the morals they have been taught their entire lives.
It also reinforces the fact that atheists as a group are much more moralistic than Christians.  Perhaps it would be wiser to listen to a short speech by an atheist before the meeting, as atheists as a group are more educated and it actually could be beneficial.  Statistically, atheists have fewer divorces, fewer out-of-wedlock pregnancies, fewer abortions and they are among the least likely to be in jail. Perhaps atheists should garner a bit more respect than the clergy who are either deluded or putting one over on the congregation for the sake of revenue.
This is not a Christian nation.  If a Christian nation were the goal of the founders, that concept would appear in the Constitution.  It does not.  Before, during and after the writing of the Constitution, there were people just like you, pushing to have religion added and criticizing the founding fathers’ decisions.  There was even an amendment proposed to the preamble (that Jefferson said had already been mutilated) to add “Jesus Christ” to it.  That was turned down.
I find it amusing that you cannot say a prayer to God without mentioning Jesus for the sake of all the various people who may be listening.  That does not sound caring, kind or considerate.  You said that “praying to the Father through Jesus” gives validity to the prayer.  Apparently, you feel that only prayers with the name of Jesus are valid.  Prayers of all other religions, therefore, are not valid; prayers to God are not valid.   Well, as I said before, prayers are not valid.
There would be a simple solution to the prayer situation and you would not have to worry about what name is invoked.  You can pray at home, at church, or even have those from the meeting who want to pray in a group meet at your house before the meeting or after the meeting, and have a prayer for that “group effect.”However, I am sure that the suggestion to pray before one attends a meeting has been brought up before and I am sure Christians will continue to ignore the suggestion, because they would rather inflict their Christian beliefs on everyone."


Posted by Atheist Vegan at 6:07 PM No comments: