You Call This Humane Meat?

If anyone truly buys the claim that the mom and pop farm down the street that they went to to get their animal for dinner was killed “humanely,” then I think we should examine two possible ways they killed the animal. You may find this offensive, but you must learn what actually happens to the animals on the “happy farm,” who are fortunate to be slaughtered at home.

1. The most popular method for killing chickens and turkeys that is considered humane (by meat eaters’ standards) is called the “killing cone” method. Let’s run through it, but instead of using a chicken, let’s use a dog, so you can relate better.

You look at your puppy at 10 months of age and decide it is a good night to eat a meal of dog meat. So you take your puppy to the shed. You pick him up and stuff him upside down into the killing cone, pulling his head out of the lower part of the cone so you have a good view of his neck. Look how snug he is in the cone – he won’t be able to thrash around much. That is so considerate of you! Then, you slice his throat and watch his heart pump out his own blood into a bucket below, so he doesn’t make too much of a mess. He does thrash some, and have a spasm or two, and then he settles down – still. You decide he is dead after a minute, even though experts state that it can take four to eight minutes for the dog to die, depending on whether you hit both jugulars or not. But since you don’t know that, after a minute, you pick up the dog and throw him onto a hot grill in order to singe off his fur.

Not humane enough for you? Are you ready for the most humane method possible? Here we go! I have seen this method used with turkeys, but we will again use a dog as a stand-in.
2. Your dog is playing with other dogs in a pen. Several people come to the farm, excited that they will “experience nature” and kill their own dog. You are the guide. Each person picks out a young dog to kill, and you pick out one yourself. You put your puppy in front of you and then sit on him gently so he can’t thrash around. Everyone else does the same. You each put a bag over your dog’s head so he won’t see what is coming. You take a knife, gently stretch out the dog’s neck while you coo, coo, so softly to him and encourage him. Then you cut his throat and as he tries to thrash around, you hold him firmly, and thank him for giving his life to you. You talk to the other fellow killers: “Can you feel the life-blood coming out of him? It is nature’s cycle! We are doing what we are supposed to do – loving our animals as we take their lives for ourselves.”
I personally thought the woman who ran this business and did this with turkeys had lost her mind, but apparently this is accepted in our culture. It is the most humane method I have seen. But do you notice the betrayal toward the animal?
Please do not call any of these killings humane. They are not. People only call it humane so they can eat an animal guilt-free.
If you have any other methods of killing an animal you want to discuss, I know about “humane” CO2 killing too. Or just substitute your dog for the animal (in your mind) and run it by your own conscience and see if you still think these killings are humane.
Posted by Atheist Vegan at 7:48 PM No comments:

My Book about Battling Bulimia


Exciting! My e-book is on sale! 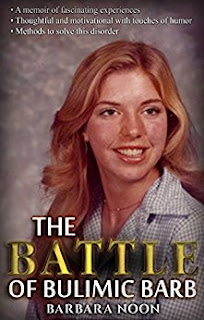 I wrote The Battle of Bulimic Barb in order to help others conquer this eating disorder, and to help families and friends gain more knowledge and understanding about the illness.
My book is not to take the place of therapy, but will give tips of what helped me, and my personal analysis of my 11 year battle with bulimia.  I left out nothing, sharing even the most embarrassing moments.  Dare I say, it is entertaining, and thought-provoking!
Today, April 1st through Thursday, April 6th, the Kindle version of The Battle of Bulimic Barb will be available to purchase for just 99 cents! If you ever thought about reading it, this is the week to order it!

Posted by Atheist Vegan at 4:36 PM No comments: