Where Would You Have Stood on Slavery? 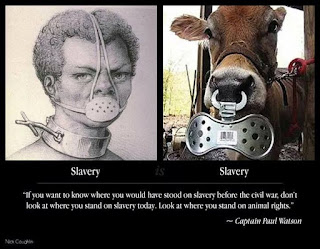 At first, I thought this was not a good comparison, but when I thought about the excuses most people use to continue to enslave and kill animals, I think this meme is valid in most instances.  If you are a person who would have been enslaved yourself before the Civil War, this meme shows how you would think if you had been a free person.

Pay attention to the excuses.  They are the same excuses that were used against slavery:

They are just animals.
They don’t matter.
They don’t have the same feelings as we do.
They aren't as smart as we are.
They don’t know any better.
It says we can in the Bible.
We are supposed to use them.
They are happy.
All we need to do is provide a slightly better life for them.
They won’t be able to function on their own.
We need them and use them in all facets of life.
There will be too big a change if we stop using them.


Posted by Atheist Vegan at 4:19 AM No comments:

GOING TO HELL FOR A CONCEPT

I get a kick out of Christians who say “they don’t judge.” They speak of beautiful sayings such as “turn the other cheek.” Yet, their entire religion is based upon judgment, and the characters they worship sure don’t turn any cheeks!
Christians don’t have to judge, because God will do it for them. Some even revel in saying, “You just wait to you die! You’ll get yours! God will judge you!”
What does the Almighty One judge? A concept of a concept.
The main criteria for floating up to Heaven instead of being thrown into Hell is whether you believe in God and have accepted Jesus as your savior. Put yourself in an atheist’s place - what if you look at the concept of an afterlife, and evidence shows that it does not exist, and you know what happens to the brain during death; you also know the history of other religions and the flaws in the Bible. Based on rational thinking and research, you make informed decisions that you do not believe the concept of God, you do not need to be saved by a character named Jesus, and that there is no afterlife. So you don’t believe the concept (having to believe) in a concept (God/Jesus/afterlife).
If you are wrong, THIS IS WHAT SENDS YOU TO HELL! You will burn for eternity – tortured – for not believing that you had to believe in the Christian god.
Sounds more like a religion of revenge to me. If a god exists, then there is purposely no credible evidence for any god and there is purposely a lot of evidence against any god; which means this god intentionally tricked people into not believing. Think about that.
God is nothing but a concept. You talk for him, you learn about him from a book and from your parents or friends so that you can tell people what he is like. You are told how to communicate with him. All of it is conceptual. There is total silence from this god, even in mass shootings in a church.
People look for anything good they can find, so they can make an excuse for their silent god. They must retain the concept that he is there and is loving, because the evidence says otherwise. The emotions and a promise of an afterlife drive that need and desire to retain the concept of a loving but vengeful god.
Just think how petty this is: “not believing in a concept” gives you eternal burning. What really is the crime here – “a person who does not believe” or “a god who sends people to be tortured for eternity simply because they did not believe?”

Posted by Atheist Vegan at 5:35 PM No comments: